contains 21 talks given by writers upon accepting the Nobel Prize for their work. I initially checked out this book to read more from Nigerian writer Wole Soyinka and found myself captivated by many of the other authors.

Following are eight quotes I gathered from reading this collection. 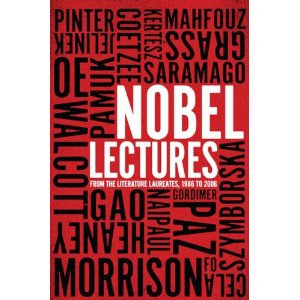 In My Father's Suitcase (1986), Pamuk speaks about the fear of reading his father's writing: "For me, to be a writer is to acknowledge the secret wounds that we carry inside us, the wounds so secret that we ourselves are barely aware of them, and to patiently explore them, know them, illuminate them, to own these pins and wounds, and to make them a conscious part of our spirits and our writing."

Harold Pinter
In Art, Truth and Politics (2005), Pinter writes about hidden crimes and the challenges revealing the truth: "I put to you that the United States is without doubt the greatest show on the road.... Listen to all American presidents on television say the words, 'the American people'.... Language is actually employed to keep thought at bay. The words 'the American people' provide a truly voluptuous cushion of reassurance. You don't need to think."

Imre Kertész
In Heureka! (2002), Kertész reflects on the Hungarian dictatorship in the mid-20th century: "I understood that hope is an instrument of evil, and the Kantian categorical imperative--ethics in general--is but the pliable handmaiden of self-preservation."

Gao Xingjian
In The Case for Literature (2000), Gao cautions not to celebrate peace in isolation: "This new century will not be immune to catastrophes simply because there were so many in the past century, because memories are not transmitted like genes."

Toni Morrison
In The Bird Is in Your Hands (1993), Morrison's parable about the transfer of wisdom is especially powerful: "Language can never 'pin down' slavery, genocide, war. Nor should it yearn for the arrogance to be able to do so."

Derek Wolcott
In The Antilles: Fragments of Epic Memory (1992), Wolcott remembers a village performance by Indian Trinidadian perfomers: "They were not amateurs but believers."

Joseph Brodsky
In Aesthetics and Language (1987), Brodskly reflects on the Russian Revolution of 1917: "For in a real tragedy, it is not the hero who perishes; it is the chorus."

Wole Soyinka
In This Past Must Address Its Present (1986), Soyinka rages against the oppressive writing of Frobenius, Hume, Hegel, Motesquieu and others: "Warning! This work is dangerous for your racial self-esteem."

Reading these lectures from the literature laureates reminded me of the power of words, written in isolation, to grapple with the social condition.

Labels: Mother of Us All Research