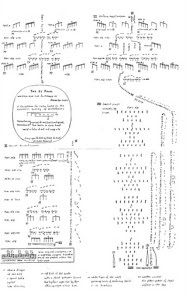 The other night, I met with Kris and Hiro at Native Foods in Westwood. We talked about Björk's interview on NPR and Raghava KK's talk on TED. It's always exciting to share new artistic finds with old friends.

I worked with Kris on Two by Four in 2003. The music features him singing the Japanese and Latin names for stars. I was reminded about how attentive to invention I was during that time. I composed Two by Four in August, while I was relocating from Los Angeles to New York, after visiting On Ensemble in Mount Shasta.

Kris continues to be thoughtful and rigorous in his practice as a musician. Meeting with longtime artistic friends like him refreshes my intellectual rigour and aesthetic excitement as a composer. This is an especially significant reminder during the transition from summer into winter, in this time of gathering crops.
Labels: Research