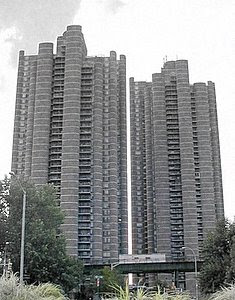 Aaron Jafferis and I met in New Haven and New York to research and write the opera Stuck Elevator, about the Chinese take-out guy who was trapped in an elevator for three days after delivering an order of shrimp fried rice.

The Tracey Towers, where Ming Kuang Chen made the delivery, are the tallest in the Bronx. They are also twin towers. There are only six elevators in each tower.

Odd that Chen went unnoticed for so long. Even though he is an undocumented immigrant, the restaurant staff noticed his bicycle parked outside. The police even arrested one of the residents who had a ketchup stain on his t-shirt.

Aaron and I finished an initial synopsis, rapped with director David Herskovits, caught his two-part Faust series, visited the Tracey Towers, and rode the infamous elevator.

Thanks to API/2, Artist Trust, and 4Culture for supporting the development and initial presentation of this new opera. These are two photos from our research. I also took photos of Happy Dragon Restaurant and an elevator out-of-service sign, which I may post on the Stuck Elevator research blog. Here's a photo of the Towers.
Labels: Stuck Elevator