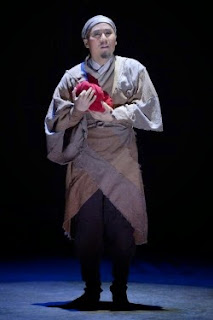 Thanks Jack Lyons for The Orphan of Zhao review called “2400 Year Old Chinese Drama Is Reimagined For The Stage At The La Jolla Playhouse”:


“The production is sensitively and deftly directed by Carey Perloff, and boasts onstage musical accompaniment in the form of a sensuously played cello by Jessica Ivry, and a series of violin interludes, performed by cast member Philip Estrera…. The costumes designed by Lind Cho are spot-on, and sound by Jake Rodriguez, with original music by Musical Director Byron Au Yong are first rate.”