Last night, a loud, gutter-gurgling rain kept me awake. Is it too much to ask for sun in late June? Farmer Brendan planted only six tomato plants leaving the other six in pots saying that it's not worth having stunted plants with green tomatos later this season. I smell the damp earth and think of 3Seasons reSet playing tonight and tomorrow at Intiman Theatre in Seattle.
3Seasons premiered at On the Boards in January 2010. Since then, choreographer Olivier Wevers and his company Whim W'Him have refined their repertoire with works such as Monster. Returning to 3Seasons (an adaptation of Vivaldi's The Four Seasons), I notice that Olivier has a greater attentiveness to details. Props are more carefully placed, movements are more precise and transitions are more deliberate. For the music, I have refined the instrumentation to violin + soundtrack. Crowding the performance with extraneous instruments is like planting too many tomatos.


... the music has undergone the greatest change. In the present iteration of 3Seasons, only Autumn employs the new music of Byron, which has been both drawn in and expanded. Instead of violin, percussion, toy piano and electronic sounds, the composition is now pared down to a single violin heard against a city soundscape of cars and an electronic hum. 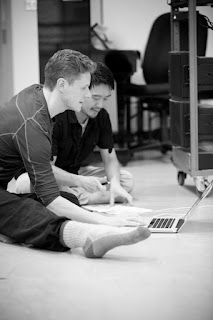 In performance the violin will be played by much the praised and prized Michael Jinsoo Lim (Pacific Northwest Ballet concertmaster and co-founder of the Corigliano Quartet). The first movement of Byron’s new Autumn has a jumbled sound. Vivaldi comes in only in snatches, as real music and… as a cell phone ring tone. It’s a 21st century landscape, of timid trust in an unimaginable future warring against barely suppressed chaos and despair. There is, as Byron says, a clear sense of something missing.

Yet for me at least, this apprehension of loss changes as the season unrolls. Last week, after re-observing his bleak take on the Vivaldi Winter (that ends his ballet), I said to Olivier, “This sure doesn’t finish on any note of redemption, does it?" to which he assented. But yesterday, watching the season that preceeds it, I felt an unexpectedly different note in Autumn’s final movement.

By this time, the clutter and static of the earlier sections of Byron’s soundscape are burned away. The violin plays on alone, its sound harsh, seer, but purified, clean. As if, out of the dross that we’ve made from our world, one clear, authentic, silver voice has been refined— or might be. Perhaps this line of music represents another chance for the human race, a sounder basis for a better, more sustainable and earth-centric future. Whether we can save ourselves and our world, or if the centuries to come hold only the peace of cessation, is still, of course, obscure and will remain so well beyond our time. I might be talking through my hat, but ever optimistic, I asked Byron after rehearsal, “Is Autumn maybe where hope creeps into 3Seasons?”

His answer was a broad, if enigmatic, grin.

Read more of Victoria's insightful thoughts about the revised 3Seasons with photos from La Vie Photography at Whim W'Him's blog.