Fifteen: from abstract to personal

On Tuesday, I attended my first rehearsal of Fifteen for violin and taiko. Choreographer Michelle Fujii, violinist Keiko Araki, and taiko player Kelsey Furuta have been working from a score I sent a few weeks ago. The score is in fifteen sections to be performed in any order. This was the first chance for me to experience their discoveries live and offer insights.

Last year, Portland Taiko celebrated their 15th Anniversary. Thinking about the number 15, I started a series of sketches for violin and taiko. I played with the number 15: 9+6, 3x5, Lo Shu magic squares, the word fifteen having seven letters, and so on. 15 in the abstract was versatile, but refused to grow into a musical composition. When artistic director Fujii mentioned Ten Tiny Taiko Dances, my thoughts shifted.

I remembered an article I had read about child sex trafficking in South Africa. One of the main characters in the article was Elizabeth, a 15-year-old girl. Her best friend had tuberculosis, full-blown AIDS, and was three months pregnant.


In Composition in Retrospect, John Cage wrote, "Music never stops. It is we who turn away." The World Cup happens in South Africa in June 2010. How can millions watch when next to the stadium, children are raped? Along with being a number, 15 is a transformative, magical age, yet some 15-year-old lives are truncated.

I realized that Fifteen refused to grow from number games, because music is transformative and magical. Taking the idea of truncation to the extreme, Fifteen contains 15 sections performed in any order as offerings and sacrifices. Moreover, while the violinist and taiko player rehearse sections together, they perform the sections apart. Elizabeth's best friend died. For Ten Tiny Taiko Dances, Fifteen struggles to live fully within confines where an eternity can take place within 15 seconds. 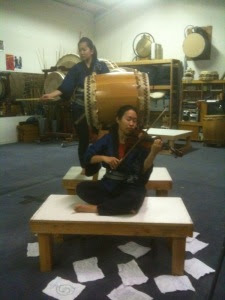 Fujii, Araki, and Furuta have found ways to merge the abstract and concrete with strikingly simple gestures. Notice the already limiting 4' x 4' stage further cut-in-half by the drum as well as the score tossed and crumpled about the stage.

Fifteen overflows with possibilities yet is contained. The performers talked about sections having clear narratives that they developed. At times, Araki plays the violin while lying down, at another time, they exchange bow with bachi (drum stick). The sounds they have discovered from the score and while moving are both strong and delicate. Fifteen comes alive within the joy and sorrow of multiple silences. Please attend the premiere.