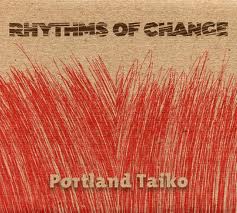 “Byron Au Yong, the Seattle composer who’s worked with Portland Taiko before, arrives with a score already in hand. He passes copies around the circle: it’s elegant, intricate notation.”

Fifteen for violin and taiko premieres June 19-20, 2010, at the Portland Center for the Performing Arts. The work is in 15 sections; each section should last for an eternity. Practically, each section lasts from 15 seconds to 5 sets of 15 seconds.

Previously, Hicks attended a recording session for Portland Taiko’s CD Rhythms of Change. His in-depth writing included a section about my conducting Michelle Fujii’s work for violin and taiko called Slipping Through My Fingers:

“The drummers are following the violinist, but they can’t hear her. They’re looking for compensating visual cues, and they’re a flick late. So Fujii asks Byron Au Yong, a Seattle-based composer who works internationally and has collaborated with several taiko groups, to stand out in the auditorium where everyone can see him. From a few rows up, he patiently motions entrances and keeps the beat: It’s all in the timing.”

I’m excited to hear how Fujii and violinist Keiko Araki will interpret Fifteen, where the music is timeless, yet nonetheless timing is important.
Labels: Audio News Taiko