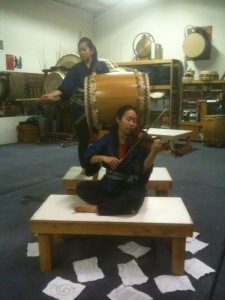 Bob Hicks visited a collaborator meeting with Portland Taiko for new works to premiere this June. Here are some of his thoughts in an article called Ten Tiny Taiko Dances: The First Steps.


Byron Au Yong, the Seattle composer who’s worked with Portland Taiko before, arrives with a score already in hand. He passes copies around the circle: it’s elegant, intricate notation.

Au Yong is working with the number 15, because this is Portland Taiko’s fifteenth season. The number contains mathematical and musical possibilities, various rhythmic and structural components. As he was thinking about the number, he read a Newsweek report about 21st century slavery, about girls being sold in South Africa, where the World Cup will be played in June, when this performance will take place. “So that began to put a human face on the number 15. If your body is taken away from you, how do you survive?” For all that, he adds, “musically, I want this to be a very quiet work.”