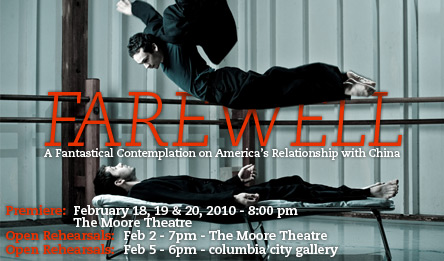 Tonight is the open rehearsal for FAREWELL: A Fantastical Contemplation on America's Relationship with China. As composer on this project, I've been attending rehearsals at Spectrum Dance Theatre and meeting with choreographer Donald Byrd as well as musicians Paul Kikuchi and Tiffany Lin. This new work will be premiered at The Moore Theatre in less than three weeks (!)


Working on FAREWELL I've learned that:
Rehearsals have been intense and magical. Come to The Moore tonight at 7PM for the Open Rehearsal: free and open to the public. Attend the show February 18-20, 8PM.
Labels: Events Farewell