Kidnapping Water: Bottled Operas is about the forced migration of an element more powerful than man. With a creative team of classical and avant-garde musicians, I explore human interactions with water through 64 intimate operas. 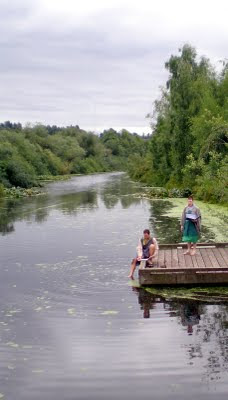 Each bottled opera will be two to five minutes. These 64 miniatures include songs of human foibles set amidst tales of droughts and floods. I collect water memories, romances and renewals to decipher the traumas and joys of water's continual ebb and flow. Listening to water, I compose these operas.

64 = 8 x 8: the number of hexagrams in the 易經 I Ching (The Book of Changes). Each of the hexagrams relates to an archetypal state such as conflict or peace. With 64 bottled operas, I am able to encapsulate a cosmology of opposition and change for the 21st century.

Kidnapping Water is for eight opera singers, each accompanied by one instrumentalist such as a Chinese drummer. Each singer will learn eight portable songs to create site-specific sets that last in duration from 16 to 40 minutes. These Bottled Operas will be performed in fountains, reservoirs, pools, lakes, and other waterways.

The 64 portable vocal/water studies will be documented by a videographer for online distribution as well as an audio/video installation that will be at the Jack Straw New Media Gallery in November/December 2008.

Over one billion people lack access to safe drinking water. I listen to water because one day it may disappear. With an empty plastic bottle, I search for ways water connects people with the places they call home. I listen to stories and sounds to find meaning in a world filled with beauty and terror. Interested in the interplay between the environment and listening, I find musical gestures in everyday actions. These gestures form the basis of eco-ceremonial works created to honor the ritual of people who gather to listen.
Labels: Kidnapping Water