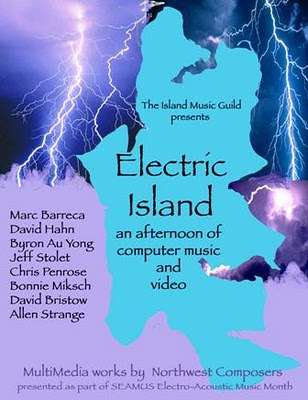 Mare Insularum translates from Latin as Sea of Islands. It refers to a basin on the moon bordered by the craters Copernicus and Kepler. In the past, storytellers thought these lunar circles were filled with water when in fact they are basaltic plains. The Sea of Islands is dry.

I think about this contradiction as I bicycle in the rain. Will the Pacific Northwest one day be dry?

Insularum comes from the Latin root “to insult.” As an acoustic composer in a sea of computer music composers, I find myself abashed. I feel lost amongst machines and run towards rocks and trees, watching electricity in the form of lightning from a distance.

For a performance as part of Electric Island, I enlist the cassette tape recorder. My electronic equipment hisses and clicks. It channels the news. It plays at uneven speeds. Yet, perhaps because it is as old as I am, I find the patience to record water sounds and listen.

Like with water, the old recorder becomes a place where I play, gurgle, drown, and reflect on whether the world will be consumed in a deluge or left in a drought.

August 14, 2006 Research
This November, I will be on the Electric Island Concert as part of National Electro-Acoustic Month, sponsored by the Society for Electro-Acoustic Music in the United States (SEAMUS). The producer said the only requirement is that works use electricity. I look for instruments with plugs and find a cassette tape recorder.

The cassette tape recorder finds itself replaced by clearer sounding, less cumbersome machines. It cries out to be saved from the scrap heap of forgotten appliances. I cry out that I will find a way to remember this instrument from my childhood.

I record layer after layer using two cassette tape recorders borrowed from my friend Frank Phillips. One of them was used by his blind father. As I experiment, I realize that the pause button is my friend. Who wouldn’t want to suspend mortality?

I press pause and wait.

The tape hisses to “Press Play” as it strains to continue recording the past in the present archived for the future. One click is all it takes to return.

I wait a bit longer and remember what has been left behind.
Labels: Events Research