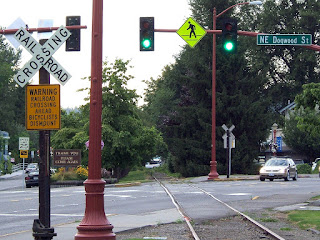 Where Sounds Meet
There is a point in the old town area of Issaquah, where Front Street, Dogwood, and Rainier Boulevard intersect. Train tracks cross a creek traveled by salmon and in the distance Tiger and Squak Mountains converge. I am excited by this location, inspired by both the historic railway tracks that are part of American iconography and the glorious power of the Pacific Northwest ecosystem.

Puget Sound Coast Salish originally called this place home. They gathered berries and roots and were blessed with the cedar and salmon. The Lushootseed Salish called this area "Ishquoh" from the sound of waterfowl taking flight. They rarely went into the mountains, but knew that the Issaquah Alps contained "fire rocks."

When non-Native Americans entered the area in the 1860s, Ishquoh was transformed from a sustainable home for the Puget Salish to an area mined for coal. For nearly 100 years, coal miners transformed the landscape and left holes in the earth. In it's heyday, Issaquah's mining town had 1,000 residents.

Today, over 17,000 people live in Issaquah. A few citizens are descended from coal miners, but most are recent transplants from all over America, China, India, and other parts of the world. They come for the forests, lakes, hiking trails, and historic ambiance. Standing on Front Street looking towards the mountains, I close my eyes to feel the breathtaking natural beauty and suddenly, I am no longer in Issaquah.

Car engines growl. Brakes squeak. Tires swoosh. Noise, from the Latin word for Nausea, causes my stomach to churn. Instead of the expected wind, water, and bird songs, I hear the roadway sounds of Anywhere, America.

I live in a country where people dream of finding a peaceful home. Issaquah has that potential, yet my ears and stomach ask me: "10,000 years from now, will you be able to hear ‘ishquoh’ ring through the trees?" I ponder this question with rocks and water, listening to my footsteps between the train tracks as I walk quietly towards the cedar trees.

Invited by the Issaquah Arts Commission, I create a musical ceremony where the streets, train tracks, creek, and mountains meet. The site-responsive work Ishquoh: Where Sounds Meet will happen just before sunset on October 14, 2006. The performance space will be between and alongside the railroad tracks from Dogwood Street to the 1889 Train Depot. With music and movement, my performers and I will explore how people affect the natural environment in the historically charged, stunning location many children call home. 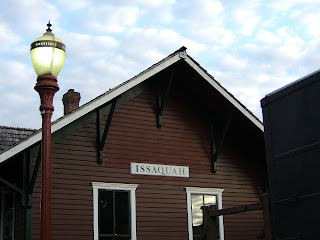 4Culture and the Issaquah Arts Commission present this project. Project advisors include: