When Archana Kumar and I met last month, she had just returned with Ying Zhou from the Asia Meets Asia Festival in Tokyo. We talked about how global time zones affect our chronological, metaphoric, relative, and genetic sense of time. These thoughts form the basis of Samai: Lost in Time, a work we will premiere at the Grand Reopening Celebration of the Seattle Asian Art Museum on January 21, 2006. 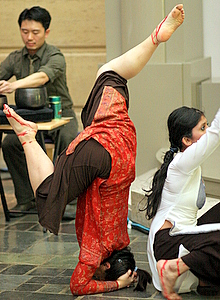 Archana and Ying are musical choreographers. While watching a preliminary version of Samai, I noticed their penchant for momentary pauses where they spoke or sung. These moments were surrounded by detailed gestures. Their movement ideas at Open Flight's second floor dance studio with the ticking clock reverberating and cars passing on the rain-swept street below revealed a complete world.

The musical score I created is sparse. I surround my voice with three prayer bowls tuned a fifth and a tritone apart. I also use a few rice grains and two sticks. With these instruments I play music that initially references chronological time with a stick strike every second. This transforms into a dream-like soundscape with resonant elongated vocals singing:

Dho pal ttokar, rakthee hoon, uski raahein takthee hoon.
(I am ready to give away my time as long as I see that person's shadow.)

Bandhene lagi, yun kisi ke saath zindagi.
(As I walk down the road, my life begins to braid with the lives it comes across.)

In addition, these are some of the words and images that pass through my mind as I sing:

Working on Samai, I realize that the space between the live music and silence holds the elusive and complex character we call time. This is the space where we often find ourselves: lost denizens traveling through life.
Labels: Dance Research