On Ensemble and I are in the midst of creating After-Effect, a new work for taiko, snare drum, and turntable.

Percussionist David Schotzko prompted After-Effect. When I visited David’s studio, I noticed an old army snare that once belonged to his uncle. Thinking more about percussion music and the military, I came across the idea of the motion after-effect.

Doing further research on the after-effect, I found that Marcel Duchamp created 12 rotoreliefs where he spun various spirals atop phonographs. I have wanted to write a work for taiko and turntable where the ancient beats of the taiko met the electronic technology of the phonograph. The rotoreliefs connected the musical instruments with the after-effect and helped solidify this as a work propelled by violence. 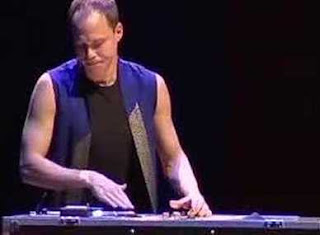 If you watch a spiral spin in one direction for at least 30 seconds and the spiral suddenly stops, the neurons in your mind will spin the spiral in the opposite direction. This uncontrollable going back reminded me of the ringing sensation in the ears caused by a mass of sound followed by a sudden silence. This is the aural equivalent to the visual after-effect, as well as a post-traumatic symptom caused by war.

On Ensemble, with Kelvin on snare and chu, Shoj on shime and chu, and Kris on turntable, presented After-Effect as part of their sold-out Works-In-Progress Concert at Miles Memorial Playhouse in Santa Monica on December 18, 2005. We will develop a complete version to present in Spring 2006.

Thanks to API/2 for supporting part of my residency with On Ensemble.